Top 18 places to visit in Gujarat

Tripiwiki : 18 May 2022
Gujarat offers scenic beauty from Great Rann of Kutch to the hills of Saputara. Statue Of Unity is the major tourist spot of Gujarat. Ahmedabad with its central location and a well connected international airport is considered to be an ideal hub to cover all the destinations in Gujarat.

Following are the Top 18 places to visit in Gujarat 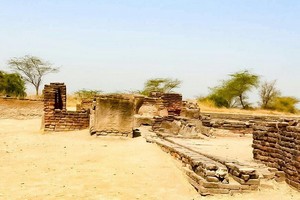 Lothal is situated near the village of Saragwala in the Dholka Taluka of Ahmedabad district of Gujarat, India. Lothal was one of the most prominent cities of the ancient Indus valley civilization. The archaeological remains of the Harappa port-town of Lothal is located along the Bhogava river, a tributary of Sabarmati, in the Gulf of Khambhat. The Lothal site has been nominated as a UNESCO World Heritage Site, and its application is pending on the tentative list of UNESCO. Lothal is located at approx 103km form state capital Gandhinagar, 78km from Ahmedabad, 127km from Vadodara, 175km from Rajkot, 285km from Rajkot, 448km from Indore, Madhya Pradesh, 566km from Mumbai, Maharashtra. 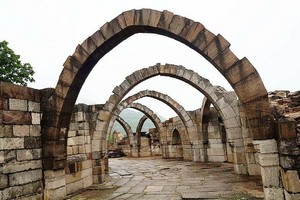 Champaner-Pavagadh Archaeological Park, a UNESCO World Heritage Site, is located in Panchmahal district in Gujarat, India. It is an ideal mix of Hindu-Muslim architecture. Moreover, it is the pilgrim center for the Hindus. Archaeological Park includes an ancient citadel, a palace, entrance gates and arches, mosques, tombs and temples, residential complexes, agricultural structures, and water installations. City which was built by Sultan Mahmud Begada of Gujarat was a capital region of the empire of Mahmud Begda. It was inscribed by UNESCO as a World Heritage Site in 2004. Champaner Pavagadh Archaeological Park is located at approx 49km from Vadodara, 149km form Ahmedabad, 167km from state capital Gandhinagar, 201km from Surat, 409km from Nashik, Maharashtra, 464km form Mumbai, Maharashtra. 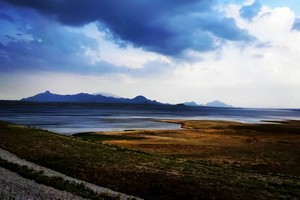 (3 out of 18 places to visit in Banaskantha)

The Dantiwada Dam has been constructed across the Banas River near Dantiwada, Banaskantha district of Gujarat,India. The motive behind the construction of this dam was to control flood and provide water for the purpose of irrigation projects in Gujarat. Several visitors from all over the country are drawn to this dam due to its scenic beauty. Visitors make sure that they visit the Balaram Ambaji Wild Life Sanctuary located near the dam. It is the dividing line between Dharoi Dam and Dantiwada Dam. It is located at approx 151km from state capital Gandhinagar. 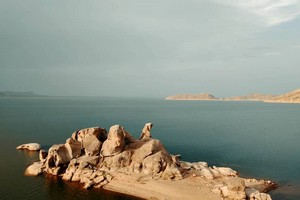 Dharoi Dam is a gravity dam on the Sabarmati river near Dharoi, Kheralu Taluka, Mehsana of Gujarat, India. Basically built for the purpose of irrigation, the dam is a nice picnic spot too. Dharoi Dam is located at approx 103km form state capital Gandhinagar, 129km from Ahmedabad. 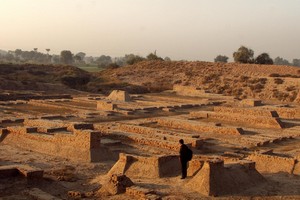 Dholavira is an archaeological site at Khadirbet in Bhachau Taluka of Kutch District, in Gujarat, India. Located in Khadir island of the Rann of Kutchch belonged to matured Harappan phase. Today what is seen as a fortified quadrangular city set in harsh arid land, was once a thriving metropolis for 1200 years . Dholavira is the larger of the two most remarkable excavations of the Indus Valley Civilization or Harappan culture, dating back to 4500 years ago. Dholavira is located at approx 350km from state capital Gandhinagar, 258km from Rajkot, 358km from Ahmedabad, 467km from Vadodara, 886km from Mumbai, Maharashtra. 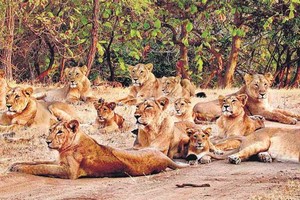 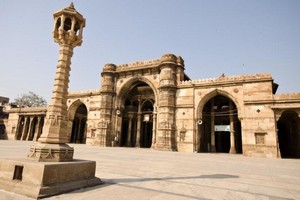 Historic City of Ahmedabad also called as Old Ahmedabad or walled city of Ahmedabad presents a rich architectural heritage from the sultanate period which is located in Ahmedabad, Gujarat, India. City was founded by Ahmad Shah I of Gujarat Sultanate in 1411. It remained the capital of the Gujarat Sultanate and later important political and commercial centre of Gujarat. The walled city of Ahmedabad has it all to be the first city in India to be Inscribed in UNESCO's World Heritage City list of 2017. Situated in the heart of Gujarat There are hundreds of temples, mosques and other pilgrim spots in the city. Among all, one spot glaringly draws our attention, which is none other than Sabarmati Ashram. Ahmedabad is located at approx 27km from state capital Gandhinagar, 214km from Rajkot, 112km from Vadodara, 267km from Surat, 531km from Surat, 657km from Bhopal, Madhya Pradesh. 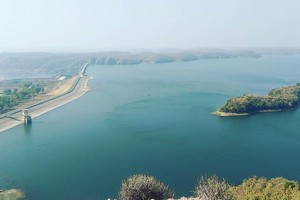 Kadana Dam is a multipurpose composite masonry-cum-earth dam which is constructed 3 km upstream of Kadana village situated on the banks of river Mahi in Panchmahal district of Gujarat, India. Dam provides a Beautiful picturesque views of the magnificent river and the mountains surrounding it. A small trek and walk from the parking lot will also provide some breather from days ride. The primary objective to build the Kadana Dam on River Mahi was to control floods in the catchment area. Dam has a catchment area of 25,000 square kilometres and receives 750 millimetres of annual rainfall. The dam was constructed between 1979 and 1989. The dam supports a pumped-storage hydroelectric power-station. The power station is located at Kadana Dam on Mahi River in Mahisagar District. Mahi main canal provides irrigation water for 12 months to Kheda, Anand & Mahisagar district. Kadana dam is located at approx 159km from Gandhinagar, 161km from Ahmedabad, 164km from Vadodara, 275km from Indore, Madhya Pradesh. 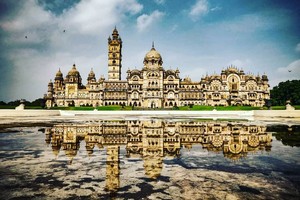 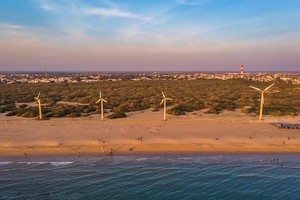 Marine National Park in the Gulf of Kutch is located in the Devbhumi Dwarka/Jamnagar district of Gujarat, India. There are 42 islands on the Jamnagar coast in the Marine National Park, most of them surrounded by reefs. The best known island is Pirotan. The fauna found here include: 70 species of sponges are found. Coral 52 species including 44 species of hard coral and 10 species of soft coral, finding a veritable underwater forest with creatures of fantastic colors and patterns and textures that you used to want to draw as a child. Just the ride from Jamnagar to the islands, even before exploring them on foot, is spectacular. Marine National Park is located at approx 140km from Jamnagar, 240km from Rajkot, 480km form state capital Gandhinagar. 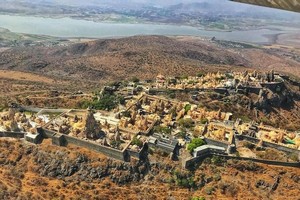 Palitana Temples is a largest cluster of Jain temples located on Shatrunjaya hill near Palitana city in Bhavnagar district of Gujarat, India. This site on Shatrunjaya hill is considered sacred by Svetambara Jains. It is said that 23 of 24 Jain Tirthankaras (except Neminatha) sanctified the hill by their visits. The main temple at the top of the hill is dedicated to the 1st tirthankar, Lord Adinath (Rishibdeva). These temples are built by different generations of Jains over a period of 900 years. Palitana Temples hill top is located at approx 12km from Palitana, 64km from Bhavnagar, 170km from Rajkot, 246km from Gandhinagar. 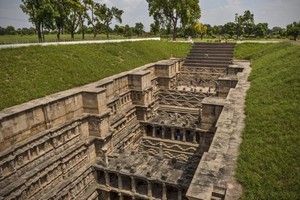 Rani ki Vav is a stepwell located in the town of Patan in Gujarat, India. It was added to the list of UNESCO's World Heritage Sites on 22 June 2014. It is located on the banks of Saraswati river was initially built as a memorial to a king in the 11th century AD. Stepwells are a distinctive form of subterranean water resource and storage systems on the Indian subcontinent, and have been constructed since the 3rd millennium BC. Designed as an inverted temple highlighting the sanctity of water, it is divided into seven levels of stairs with sculptural panels of high artistic quality; more than 500 principle sculptures and over a thousand minor ones combine religious, mythological and secular imagery, often referencing literary works. Rani Ki Vav is located at approx 3km from Patan, 113km form state capital Gandhinagar, 127km from Ahmedabad, 263km from Rajkot, 657km form Mumbai, Maharashtra. 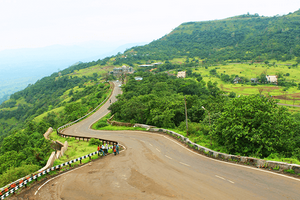 Saputara is a small yet beautiful hill station located in Dang district of Gujarat, India. Saputara is located on Sahyadris or Western Ghats is one of the popular torist destination in Gujarat bordering Maharastra. Blessed with natural beauty of waterfalls and lake adding to the beauty of Saputara is the River Sarpganga which flows through the town makes this places a must visit hill station in Gujarat, India. Saputara is located at approx 157km from Surat, 76km from Nashik, 245km from Mumbai. 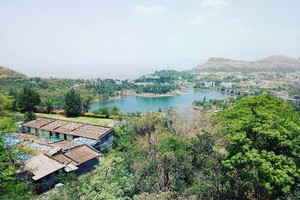 Saputara Lake is a beautiful located on Saputara hill station in Dang district of Gujarat, India. The centerpiece of this hill resort is its lake, which offers boating facilities and lakeside recreational activities. Saputara is located on Sahyadris or Western Ghats is one of the popular torist destination in Gujarat bordering Maharastra. Blessed with natural beauty of waterfalls and lake adding to the beauty of Saputara is the River Sarpganga which flows through the town makes this places a must visit hill station in Gujarat, India. Saputara is located at approx 157km from Surat, 76km from Nashik, 245km from Mumbai. 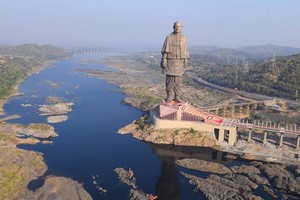 Sardar Sarovar Dam is one of the largest dam in the world which is constructed on the Narmada river near Navagam in Jamnagar district of Gujarat in India. Four Indian states, Gujarat, Madhya Pradesh, Maharastra and Rajasthan, receive water and electricity supplied from the dam. The dam is one of India's most controversial, and its environmental impact and net costs and benefits are widely debated. Dam is located at approx 221km from state capital Gandhinagar, 93km from Vadodara, 158km from Surat, 349km from Indore, Madhya Pradesh, 422km from Mumbai, Maharashtra. 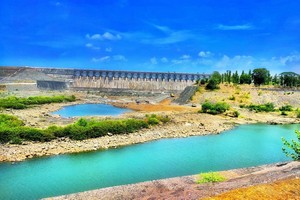 The Ukai Dam which is constructed across the Tapti River near a census town Ukai in Surat district of Gujarat, India. Ukai Dam is the second largest reservoir in Gujarat after the Sardar Sarovar. The storage capacity of Ukai dam is almost 46% of the total capacity of all the other existing dams in Gujarat if put together. Ukai Dam is located at approx 96km from Surat, 314km from state capital Gandhinagar, 362km form Indore, Madhya Pradesh, 217km from Nashik, Maharashtra, 339km from Mumbai, Maharashtra. 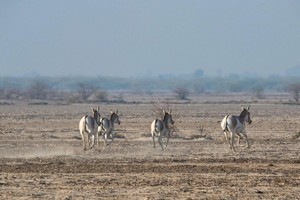 Wild Ass Sanctuary also known as the Indian Wild Ass Wildlife Sanctuary is located in Kutch district of Gujarat, India. The entire Little Rann of Kutch spreading across nearly 5000 square kilometers is known as the "Indian Wild Ass Sanctuary" is a featureless expanse of flat land (the sea bed) dotted with islands known as "Baits" which form the core for the flora and fauna. This is the largest wildlife sanctuary in India. The wildlife consists of rare and endangered Ghudkhur (Equs hemionus khur) not found anywhere else in the world. Others, such as the Blue-Bull, Chinkara, Hedgehog and carnivores such as the Wolf, Jackal, Fox, Jungle and Desert Cats can also be found here in large numbers and also a variety of birds. Wild Ass Sanctuary is located at approx 159km from state capital Gandhinagar, 140km from Ahmedabad, 163km form Rajkot, 248km form Vadodara, 538km from Indore, Madhya Pradesh, 668km from Mumbai, Maharashtra.

Places to visit by Category in Gujarat

Places to visit by District in Gujarat