Tripiwiki : 28 Jan 2023
Tamil Nadu is well renowned for its temple towns and heritage sites, hill stations, waterfalls, national parks, local cuisine and the natural environment and wildlife. Marina beach in Chennai is the second longest beach in the world and Chennai is home to numerous historic temples and parks. Chennai is also nicknamed as the Gateway of South India. The state has three UNESCO World Heritage Sites which include the Great Living Chola Temples and Mahabalipuram. The Western Ghats is one of the eight hottest biodiversity hotspots in the world and a UNESCO World Heritage Site.

Following are the Top 5 Must Visit Cities in Tamil Nadu 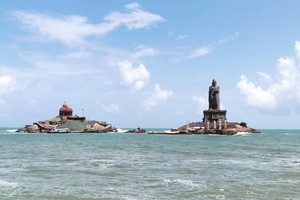 (1 out of 5 places to visit in Kanyakumari)

Kanyakumari is a coastal town in southern tip of India, located in Kanyakumari district of Tamil Nadu, India. Kanyakumari is a place where 3 Oceans the Bay of Bengal, Indian Ocean and the Arabian Sea meet and where you can see different colours of the Oceans viz. Green, Blue and Dark Grey is a sight to watc. Kanyakumari is know for being the southernmost tip of india, the only beaches in india where you can experience both sunrise and the sunset and Vivekanad statue on the see rock. It is the only place in the entire world where one can witness both the rising and setting of the sun. This small district is famous on its vast green stretches of paddy fields, coconut groves, Rubber garden and luxurious forests and the rare earth of the western sea shore and stretched valley mountain of the Western Ghats. Other than beaches, temples and churches which also attract a huge number of tourists to this city all year round. Kanyakumari is located at approx 90km from Thiruvananthapuram, 245km from Madurai, 288km from Kochi, 328km from Dhanushkodi, 578km from Puducherry, 706km from Chennai, 664km from Bengaluru.

Kodaikanal is a popular tourist hill station located in Dindigul district of Tamil Nadu, India. Kodaikanal is referred to as the "Princess of Hill stations" and is most famous honeymoon destinations in India. Located on the rolling slopes of Palani Hills of Westen ghats at an altitude of 7200 feet above sea level. Cool, pleasant climate all year round make it one of the must visit hill station in India and attracts tourists around the world for summer holiday's. The major valleys-the Parappar and Gundar surround Kodaikanal from both sides. A man-made Kodaikanal Lake is one of the major attraction of the city. The star-shaped lake is centrally located in Kodaikanal and is surrounded by the rich green Palani Hills Range. Kodaikanal is located at approx 95 km from Dindigul, 117km from Madurai, 162 km from Munnar, 169 km from Coimbatore, 272 km from Kochi, 465 km from Bengaluru, 253 km from Ooty & 528 km from Chennai. 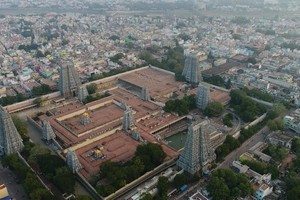 Madurai is a Historic holi city from Tamilnadu, India is know for it's Meenakshi Amman Temple. City is located on the southern bank of the Vaigai River and is also called as temple city. It is believed that the marriage of the goddess Meenakshi to Shiva actually took place in Madurai and is still celebrated every summer with great enthusiasm and gaiety. Madurai is also once of the cities in india which never sleeps and hence called Thoonga Nagaram. Historically it is also called as the Athens of the East. It is the Pilgrim and Education center of South India and also a modern Commercial and industrial city of Tamilnadu. It is also famous for its trade mark Chungudi cotton sarees, color dyeing ,motifs ,Handicrafts, Brassware. Madurai is located at approx 462km from Chennai, 265km from Kochi, Kerala, 236km from Coimbatore, 434 km from Bengaluru, Karnataka. 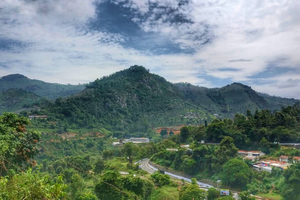 Ooty also known as Udagamandalam is a one of the most popular hill station located in Nilgiri Hills of Nilgiris district of Tamil Nadu, India. Ooty is often referred to as 'Queen of hill stations'. With it's all year cool weather, green hill stations and tea plantations, makes it one of the most popular honeymoon destinations in India. Ooty was originally a tribal land occupied by the Todas along with other tribes. The toy train, known as Nilgiri Mountain Railway that runs from Mettupalayam to Ooty is a UNESCO World Heritage Site and it is one of the best train rides you will ever have the chance of experiencing. Apart from pleasant weather, Ooty Lake, Botanical Garden, Rose Garden, Wenlock Downs, Pine Forest, and Emerald Lake are the popular near by attractions in Ooty. Ooty is located at approx 85km from Coimbatore, 126km from Mysore, 266km from Bengaluru, 242km from Munnar, 274km from Kochi, 555km from Chennai, 463km from Puducherry.

Yercaud is a hill station located in Salem district of of Tamil Nadu, India. It is located in the Shevaroys range of hills in the Eastern Ghats. Yercaud is a hill station called poor man's Ooty with abundant forests, vast coffee plantations and some unique species of flora and fauna resulting in gorgeous views. Emerald Lake is one of the popular attraction here, which is a big natural lake, surrounded by some wonderful cloud-peaked hills and a well persevered garden on its banks, this lake is a feast for the eyes. Killiyur falls is also one of the near by attraction from here. Summer Festival celebrated in Yercaud in the month of May is a special attraction. This festival is marked by a 7-day exhibition of flowers, dog shows, boating races and a village fair. The best time to visit Yercaud is from October to June. Yercaud is located at approx 336km from Chennai, 237km from Puducherry, 229km from Bengaluru, 262km from Mysore, 194km from Coimbatore, 263km from Madurai.

Places to visit by Category in Tamil Nadu

Places to visit by District in Tamil Nadu