Top 16 places to visit in Odisha

Tripiwiki : 08 Dec 2022
Odisha is one of the major tourism sectors of India, with various tourists' attractions, ranging from wildlife reserves, beaches, temples, monuments, the arts and festivals. Odisha is famous for the world-famous Jagannath Temple (Puri), UNESCO World Heritage Site Konark Sun Temple and The Leaning Temple of Huma. Odisha is the home for various tribal communities who have contributed uniquely to the multicultural and multilingual character of the state.

Following are the Top 16 places to visit in Odisha 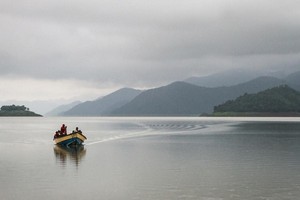 The Balimela Reservoir is located near Chitrakonda in Malkangiri district, of Odisha, India. Dam is constructed on the river Sileru which is a tributary of the Godavari river. Balimela Dam is a joint project of Odisha and Andhra Pradesh Governments and the inflow into Balimela Reservoir is shared between the two States. Located at approx 200km from Visakhapatnam, Andhra Pradesh. 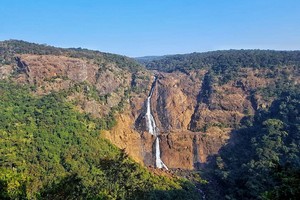 Barehipani Falls is a two tiered waterfall located in Simlipal National Park in Mayurbhanj district in the Indian state of Odisha. It is one of the highest waterfalls in India. Barehipani Falls are on Budhabalanga river at a height of almost 399 meters, and is considered the second highest waterfall in India. Located at approx 263km from Cuttack, 285km from state capital Bhubaneswar, 290km from Kolkata, West Bengal. 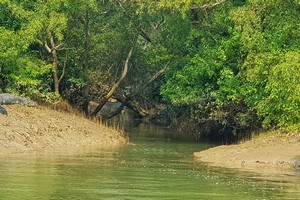 Bhitarkanika National Park is located in Kendrapara district in the state of Odisha, India. Bhitarkanika wetland represents one of the finest creations ever. The land of lush green mangroves, migrating birds and turtles, the menacing estuarine crocodiles, meandering water courses, tranquil surrounding intercepted by the chirping of birds and the ever embracing nature, entrails visitors from near and far off places to flock these unique places of tourist importance. It was designated as national park on 16 September 1998 and as a Ramsar site by UNESCO on 19 August 2002. Located at 142km from Bhubaneswar, 119km from Cuttack, 385km from Kolkata, West Bengal.

Chilka Lake is Asia's largest salted water lake located in Odisha, India. Spread over the Puri, Khurda and Ganjam districts of Odisha state on the east coast of India, at the mouth of the Daya River, flowing into the Bay of Bengal, covering an area of over 1,100 km. Balugaon and Rambha are two major towns serving as entry points for the lake. It is also known as Chilka Lake Bird Sanctuary. It is the largest wintering ground for migratory birds on the Indian sub-continent. The lake is home to a number of threatened species of plants and animals. Boat in Barkul. Water Scooters and Pedal Boats are available here. Also, drivers of speedboats allow passengers to drive if requested. There is a boating club in nearby Tampara. The place is very beautiful and pedal boats are available here. Located at 50km from Puri, 96km from state capital Bhubaneswar. 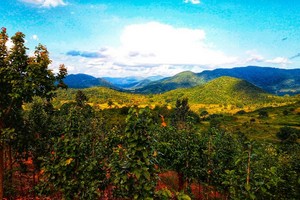 Daringibadi is amagnificent hill station also known as "Kashmir of Odisha" is in Kandhmal district of Odisha, India. Daringibadi is situated at a height of 915 m from sea level that makes it a perfect summer resort where people comfortably spend summer season, with friends and family and experience beauty of nature. Daringbadi can be reached from Bhubaneswar (252 km), the state capital by regular bus services. The nearest railway station is at Brahmapur (120 km). located at 250km from Puri, 271km from Cuttack. 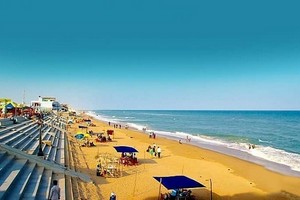 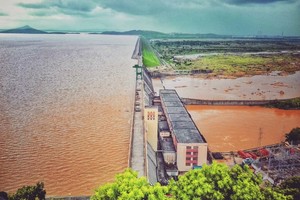 Hirakud Dam is a "Pride of Odisha" is built across the Mahanadi River near Hirakud village in Sambalpur district of Odisha, India. It is one of the first major multipurpose river valley projects started after India's independence. It is considered as one of the longest earthen dam of the world. Before the devastating floods of 1936, Sir M. Visveswararya proposed a detailed investigation for storage reservoirs in the Mahanadi basin to tackle the problem of floods in the Mahanadi delta. In 1945, under the chairmanship of Dr. B. R. Ambedkar, the Member of Labour, it was decided to invest in the potential benefits of regulating the Mahanadi for multi-purpose use. Located at approx 20km form Sambalpur, 270km from Cuttack, 294km from Bhubaneswar. 564km from Nagpur, Maharashtra. 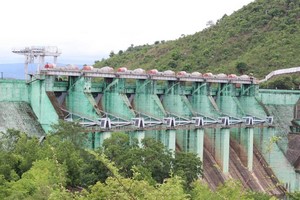 (8 out of 16 places to visit in Nabarangapur)

The Indravati Dam is a gravity dam on the Indravati River near Khatiguda town in Nabarangapur district of Odisha, India. The main purpose of the dam was Hydroelectricity and irrigation. Dam View from the Baphlimali hilltop is breathtaking. One can enjoy the Mountain Road drive to Mahulapatna. and can enjoy the water reserver, boating etc. Located at approx 299km from Visakhapatnam, Andhra Pradesh. 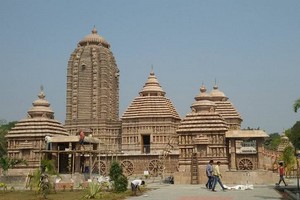 The majestic Puri Jagannath Temple is a major pilgrimage destination for Hindus located in Puri town, Puri district of Odisha, India. Temple dedicated to Lord Jagannath, a form of lord Maha Vishnu. The temple complex is enclosed by a wall about seven meters high -including the 0 height of the platform. The area of this platform is more than 4,20,000 sq.ft. The wall is pierced by four gates ,facing the four directions. The temple was built by the Ganga dynasty king Anantavarman Chodaganga in the 12th century CE. Puri is located at approx 36km from Konark, 62km from state capital Bhubaneswar, 450km from Visakhapatnam. 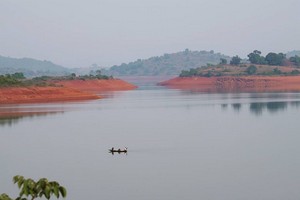 Jalaput Dam is a hydroelectric dam located near Jalaput village in Koraput district of Odisha, India. Dam is built on the Machkund River, a tributary of the Godavari River which rises in the Mudugal hills. Jalaput is a border village between Odisha and Andhra Pradesh. One bridge distinguishes between the two states. Both side of bridge are known as LF (Andhra Pradesh, Visakhapatnam district) and RF (Odisha, Koraput district). Earlier to formation of the jalaput dam it was known as Tentaput. Located at approx 166km from Visakhapatnam, Andhra Pradesh. 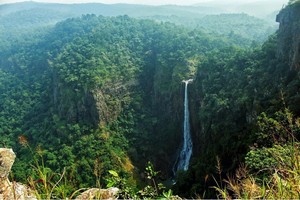 Joranda Falls is a straight and single drop waterfall located in the core area of Simlipal National Park in Mayurbhanj district of Odisha, India. The height of the joranda waterfalls at 490 feet is the 19th highest waterfall in India. This spot is both a relaxing and stunning experience. The falls are located close to other tourist attraction known as the Bacherpani waterfalls. Joranda Falls is located at approx 277km from Bhubaneswar, 282km from Kolkata, West Bengal, 315km from Ranchi, Jharkhand. 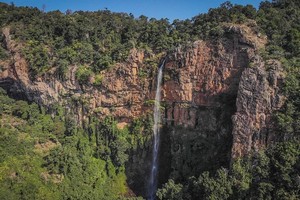 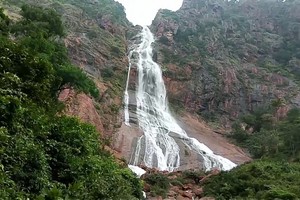 Khandadhar Falls is located at Nandapani, Bonaigarh in Sundergarh district of Odisha, India. With the height of 801 ft, It is the 12th highest waterfall in India and second in the state. One of the popular tribes that live close to this popular waterfall, the Pauri Bhuiya tribals state that once the Sundergarh branch of their community was enchanted by Kankala Devi, a goddess. is located at approx 259km from Bhubaneswar, 431km from Raipur, 596km from Kolkata, West Bengal. 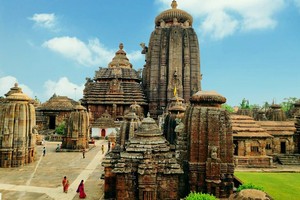 Lingaraja Temple also know as Bhubaneswar temple is a Hindu temple dedicated to Shiva and is one of the oldest temples in Bhubaneswar, Odisha, India. Erected in red sandstone, Lingraj Temple has the stone of the darkest shade. The huge temple complex covers the vast lands of Bhubaneshwar in a stretch. Surrounded by high walls on four sides, the Lingaraja temple is one of the most famous temples in Orissa. It is one of the best and splended examples of the architectural exellence which the artists had attained during 11th century. Bhubaneswar is a state capital of Odisha and it is located at 27km from Cuttack, 68km from Puri, 448km from Visakhapatnam, 442km from Kolkata, 470km from Ranchi. 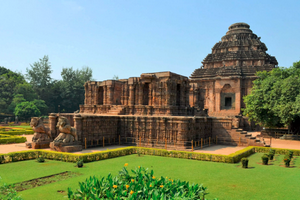 An Architecture Marvel of Eastern India, a stunning masterpiece monument and A symbol of India's heritage, Konark Sun Temple, also known as Konark is situated in Puri town, Puri district of Odisha, India. Dedicated to the Hindu sun god Surya, what remains of the temple complex has the appearance of a 100-foot (30 m) high chariot with immense wheels and horses, all carved from stone. The temple was granted World Heritage Site status by the UNESCO in 1984. Konark is located at 66km from state capital Bhubaneswar, 36km from Puri, 82km from Cuttack, 477km from Visakhapatnam. 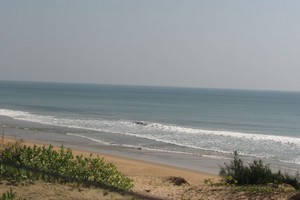 Places to visit by Category in Odisha

Places to visit by District in Odisha